Why Nodo50 has moved to Sweden?

The urgent often leaves no room for the important and Nodo50 has been working 17 years between the urgencies and the emergencies. This time, we want to celebrate the success of the operation "the Swedish move", by explaining our motivations.

For a project like Nodo50, one of the most important decisions to make is the choice of a data centre provider where to host our servers. A good hosting place for our systems is key to provide a good service. The servers do not only store public data that organizations want to publish on their websites but also confidential information as email messages or the logs of the access to our services.

When choosing our hosting, we have considered technical, economical and especially political reasons.

Technical reasons.It is important to have enough bandwidth, specially during peak times or during a campaign. As important as the speed is to have a good support offered by people and not by machines. A good hosting must meet common requirements: redundancy in the power, the cooling and the Internet connection, have enough physical security but yet easy to access our server rack when needed, etc.

Economical reasons.When looking for a good hosting for our systems, we seek to have a good affordable price. We should be able to cover the costs with the collective payment of our users. Services need to be affordable.

We should not forget that “Internet freedom” is not free, and many free services makes us less free than desirable. Or someone thinks that Google, Facebook, Microsoft, etc.. provide free services to make the world a better place? Often those services that are apparently free of charge are paid as a result of trafficking with our personal data including our browsing habits, interests or the very same content of our messages.

Political reasons.But the most important reasons are political. It is fundamental for us how the hosting provider will react under a political attack in the form of media pressure, police investigations or a court case. What will those responsible for the data centre do when a media campaign is launched to criminalize some content or certain organizations? Are they going to ask you to kindly move elsewhere to avoid problems, remain neutral or is the provider going to be supportive?. And, when a member of the security forces contact the provider to get access to personal data without a court order, is the provider going to give the data away or refuse to do it and notify to the parties involved?. Or what will happen if a company, even a large multinational or a bank or a government wants to close a critical web how will they respond?. As part of the political reasons to find a good hosting, we have considered the legal conditions of the countries where the data centres are located.

THE MARKET RESPONSE TO THE WIKILEAKS CASE

The global response to the case of Wikileaks where Internet service providers (Amazon, EveryDNS), banks (PostFinance) and payment gateways (Visa, Mastercard, Paypal) closed both their pages as well as their bank accounts without a court order, demonstrated once again that freedom of expression is not at all guaranteed and it is far from free. In December 2010, amid all the media fuss media and threats from the U.S. government, a Swedish Internet provider decided to host Wikileaks, until a Swedish judicial authority could demonstrate that they have committed a crime. 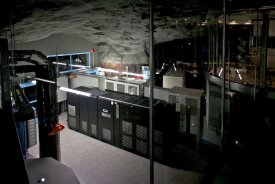 Inspired by the positioning of this Swedish provider in the Wikileaks case, and assessing the resistance of some Swedish MPs for the national implementation of European policies on data retention, we got in touch with the founders of the Internet provider to explain our project.

Nodo50 has moved its servers to Bahnhof. Bahnhof is the oldest and largest independent Internet provider in Sweden. Both Nodo50 and Bahnhof were founded in 1994. It is no coincidence that its founder Oscar Swartz saw in Nodo50 and its history, the same fighting spirit of the pioneers Internet.

Since its beginning Bahnhof has a long history of defence of freedom of expression. Bahnhof currently operates five data centres in Sweden, including the famous anti-nuclear bunker Pionen in Stockholm and controls all its data traffic operating its own fiber network in the country.

What it is really important is that in addition to take very seriously the physical security of servers, Bahnhof actively bets for the creation spaces of freedom in the network. The position of Bahnhof is internationally known following the public statements of its director Jon Karlung in the Wikileaks or the Piratebay cases.

THE CHALLENGE OF THE DATA AND HARDWARE MIGRATION

There are many ways to physically move our systems from one countru to another. Probably, a company with good cash reserves would just have bought new servers to replace the old ones and just move the data. An investment of 30,000 EUR. 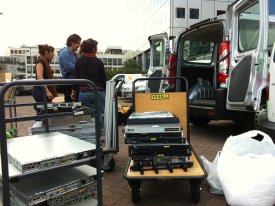 The challenge was not to do it the cheapest way. We wanted to ensure at all times that the data of our users was not far from us. After evaluating all options we decided to move the equipment in a van rather than using a transport company. One of the biggest problems of the migration was to ensure that the 1100 hosted organizations were not suffering major downtimes in the services. For that reason, we rented five servers in Sweden that we placed in our future data center while we were travelling with our own equipment. This meant that "two" Nodo50s were working in parallel for months while moving the data and services.

Before the trip started, we spent many hours planning and moving all the data to the rental servers. Long days were also spent preparing the practical aspects of trip and the filming of a documentary.

The “move to Sweden” has been the more complex technical operation of the history of the project, with many small elements depending on each other, a failure of one of them would have greatly complicated everything. It is only now that we have found some calm to share these details. 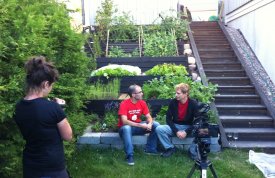 We were concerned about the increased police checks at the Danish border, although we were not a target of those racist border controls, they could pose complications. We also worried about the unexpected complications inherent in a trip of 7000 Kms by road (we almost crashed in Paris because a reckless driver). At the end the only contingency was the failure of a hard drive and five memory modules.

To complicate things a bit more, we took the opportunity to move a step further in the control of the chain of elements that connects us to the Internet; we decided to get our own IP addresses, which gives us the flexibility to transfer Nodo50 to any data centre in the world if needed. To manage this technology we have had to invest in new network routing equipment. One more expense and responsibility in exchange for more technical freedom.

We also decided to jump into the use of virtualization in our servers, which not only allows us to better use the hardware but enables the possibility of moving our data between hosting providers quickly.

A DOCUMENTARY ABOUT NODO50

Very few people have had the opportunity to see the infrastructure of Nodo50 and where our servers are hosted. Taking advantage of the trip, we came back with lots of raw video material to put together a documentary about Nodo50, which we hope to release late this summer. A trailer is available. 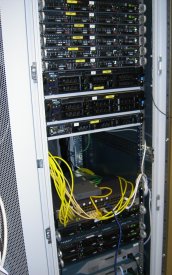 FREEDOM OF SPEECH IS NOT FOR FREE

Nodo50 has chosen a model that aims to ensure independence in the Internet as the result of the financial support from its member organizations. The contribution of each organization or person not only covers some concrete technical services but allows the creation of a solidarity fund between organizations.

Far from what many think, Nodo50 always needs resources to be able to offer more flexibility in its services and to support campaigns. Thanks to the support that all of you have offered we have been able to grow even with the constant threat of free services.

During this period of political and technical developments of the project, the Assembly of Nodo50 wishes to acknowledge the support received from many members of the old school of XS4ALL and the new solidarity found in Sweden. Fortunately, there are more and more who understand the need of independent non-commercial projects fighting to maintain the spirit of a free and open Internet. 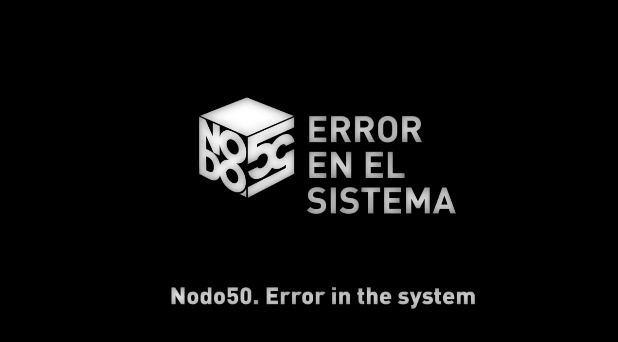 If you want to know more, sweden@nodo50.org